Maria Garcia Juarez hasn’t been to Mexico since she was a baby.

She is now 23. But with wavy, long dark hair, big brown eyes and a petite, delicate stature, the Detroit wife and mother looks more like a teenager than the criminal the U.S. government considers her to be.

Because she stole two cars as a youth, Juarez is to be deported at the end of the month, leaving her leukemia-stricken husband and 18-month-old son behind to fly to one of the most violent areas of Mexico. Juarez has no real destination and no idea when she will be able to get back home to her family in Detroit.

While she is gone, her husband is scheduled to receive a stem-cell transplant in hopes of saving his life. And her son, David, is to be evaluated to find out why he does not yet speak words.

Both her husband and son are American citizens. Juarez is not, even though this is the only land she knows.

“This has been my country forever. I don’t know Mexico. I don’t know the first thing about living in Mexico. I grew up here. This is my home,”  said Juarez, who worked as an administrative assistant and lives in Southwest Detroit.

Juarez is among an increasing number of undocumented immigrants deported from Michigan and Ohio since Oct. 1, including more than 750 criminals. Her crime? Six years ago, as a drug-addled teenager in California, she stole a car and led police on a high-speed chase.

Juarez’s case is in no way typical. It is a layered drama complicated by her juvenile record, family ties, her corrupt immigration lawyer who was sentenced to prison, and legal orders sent down by officials working under two separate presidential administrations with vastly different approaches to undocumented immigrants.

Maria Garcia Juarez, 23, was brought illegally to the U.S. when she was eight months old. A deportation order means she will leave behind a U.S. citizen husband struggling with leukemia to care for their baby who also has medical issues.

Her plight, however, illuminates the impact deportation has on families as well as the national debate over U.S. immigration policy.

Juarez’s new attorney, Carine Saleh, said Juarez would’ve been granted permission to stay in America under the policies of the Obama administration based on her husband’s illness and her clean adult criminal record. All of that is speculation. There’s no way to be sure.

But one truth rings clear to Detroit’s immigrant community: The Trump administration has changed immigration policy to ensure all undocumented immigrants are targeted for deportation. The change has coincided with an increase in local deportations that has sparked increased awareness, activism and fear.

Officials with the U.S. Immigration and Customs Enforcement said they are merely following the law and Juarez has exhausted her appeal.

“I have determined that pursuing the removal of (Juarez) is the proper enforcement action in this case and is consistent with the core mission of Enforcement and Removal Operations and the enforcement priorities of ICE,” James Jacobs, the assistant field office director for the Detroit ICE office, wrote in a letter to Juarez’s lawyer in April.

Deportations, fear on the rise

Federal immigration policy changed with the presidents this year.

At the top of the list for deportation were suspected terrorists, serious felons and those who repeatedly re-entered the country. At the bottom of the list were people who were illegally in the United States but were otherwise law-abiding residents.

The Trump administration abolished the policy and announced that more immigration enforcement officials will be hired to target any and all undocumented immigrants.

Deportations in Michigan and Ohio, the area served by the Detroit-based ICE office, are on track to exceed last year’s numbers. From Oct. 1 to April 8, 1,475 immigrants were deported, including 759 criminals.

In the prior year, 2,056 people were deported including 1,331 criminals. Of the estimated 11 million undocumented immigrants in the U.S., about 126,000 live in Michigan, according to the Partnership for a New American Economy, a pro-immigration initiative.

ICE doesn’t consider Juarez, who has had no adult criminal record, a threat to national security, Khaalid Walls, a Detroit-based spokesman for ICE, said in an email to Bridge.

Juarez was ordered to leave the country last June, while President Obama was in office. While some appeal processes exist that could allow her to remain in the country, they are long shots.

“However, as Secretary (of Homeland Security John) Kelly has made clear, ICE will no longer exempt classes or categories of removable aliens from potential enforcement. All of those in violation of immigration laws may be subject to immigration arrest, detention, and if found removable by final order, removal from the United States.”

In Southwest Detroit, where Juarez and thousands of other immigrants live, activists started preparing for such a change after Trump was elected.

Michigan United, a civil rights group with offices in Southwest Detroit and Kalamazoo, started a “Know Your Rights” effort to inform immigrants about the law and how to respond to law enforcement.

Diego Bonesatti, who is familiar with Juarez’s case, said he expects deportations like hers to increase, as well as raids like the one in March at an illegal cockfighting ring in Southwest Detroit that arrested about 50 undocumented immigrants.

“With this change in priorities and reorientation of resources, you’re going to have less pressure on (immigrant) drug smugglers and human traffickers and people with heavy felonies while they’re grabbing any random undocumented person,” said Bonesatti, director of legal services for Michigan United.

“The signal to me is the priority is just going for raw numbers, so the perception will be that they’re going after the big guns when I don’t think that’s going to be the case.” 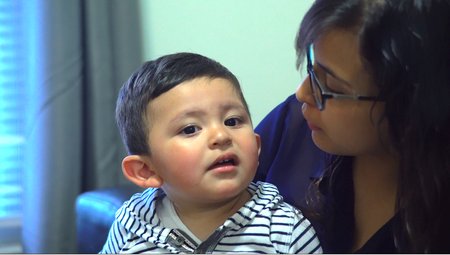 Maria Juarez’s son won’t travel with her to Mexico because it is too violent. She wonders if the boy, David, will remember her.

Juarez was born Maria Guadalupe Garcia in May of 1994 in Guadalajara, Mexico. Her mother crossed the border frequently, traveling between California and Mexico, so two of Juarez’s siblings were born in the United States, and another was born in Mexico.

In fact, Juarez said, her mother was pregnant with her in America, but gave birth to her on a trip back to Mexico.

Juarez grew up in Salinas, known now as the youth murder capital of California. After her mother was arrested and deported in 2009, Juarez and her siblings were taken in by a family friend in Salinas.

As a teen, Juarez said she fell in with the wrong crowd and began using methamphetamines. One morning another teen, who grew up with Juarez, suggested they skip school and “kick it,” court documents show. Soon Juarez was behind the wheel of a stolen car, drugs racing through her body, and leading police on a 100-mph chase.

With no parental guidance or attention, it was her second arrest for stealing a car. And the other teen who was in the car was a known gang member, so Juarez found herself labeled a gang member and shipped to an ICE facility in Virginia to face deportation.

On her 18th birthday, in 2012, she was released to live with an aunt in Taylor, Michigan, outside of Detroit.

Attorney Charles Busse was hired by Juarez’s family to help her fight the deportation case. As the years passed, she worked several jobs, paid to attend classes at Baker College and met construction worker Erick Juarez at a party.

A relationship grew after he asked her friend on Snapchat, “Who’s your friend?” The two married in 2016.

Busse had filed a case asking that Juarez get political asylum, but it was denied. Due to her juvenile record, she is not eligible for the Deferred Action for Childhood Arrivals program that often allows undocumented young immigrants to remain in the U.S. if they arrived before age 16.

Over the past several months, Juarez’s problems began to mount.

In June, she was ordered to voluntarily leave the country. She appealed, but the case was rejected in January. That same month, her husband was struck with leukemia for the second time in his life.

Based upon her husband’s illness, Juarez filed for a delay of her removal with hopes of remaining in the country, arguing that her deportation would be a hardship to her sick husband.

On April 6, her request was denied.  She was told she had until the end of May to leave the country. ICE has discretion to decide whether to detain undocumented immigrants who are scheduled for deportation.

Instead of detaining Juarez, ICE officials locked a tether on her ankle to monitor her location until she gets on a plane and flies to Mexico.

As Juarez’s life was spiraling, the lawyer who started her immigration case, Charles Busse, was indicted for immigration fraud and bribing immigration officials. He was sentenced to three years in federal prison this month.

Patricia J. Sullivan, an immigration law attorney based in Livonia and a past president of the Michigan chapter of the American Immigration Lawyers Association, said Juarez’s final legal option may be to file an emergency appeal to reopen her case based on Busse’s conviction.

There’s no indication that Busse committed fraud or bribery in connection with Juarez’s case, but she may be able to prove he provided her negligent counsel, said Sullivan, who is not involved in her case.

“Is that hard to do? Yes. The immigration docket is backlogged three to four years,” Sullivan said. “If someone works hard and works fast there’s a possibility” she can get her case considered.

Amid the legal wrangling, Juarez is preparing for the unknown.

She tries not to think about leaving her home for a country where she knows no one. Her family has reached out to far-flung relatives in Mexico hoping for a ride from the airport, a couch to sleep on or a lead on a job.

As for her mother? She could be dead or alive. Juarez said she hasn’t been heard from since 2009. And her dad was never around.

Juarez’s sister, Jocelyne Garcia, 21, worries she’ll be a target for violence in Mexico.

“It’s really heartbreaking to see they’re taking away this opportunity for her to succeed, to be with her family,” said Garcia, who lives in Detroit and is a U.S. citizen. 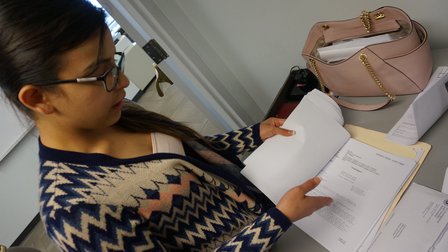 Immigration and Customs Enforcement, or ICE, does not consider Maria Garcia Juarez to be a threat to national security, but under the new ad

Juarez does little these days beyond caring for her son and husband. She changes the bandage on her husband’s arm that covers the needle he uses to hook into chemotherapy.

He’s too weak to go to his job as a cement construction worker. Until she was placed on a tether, Juarez worked as an administrative assistant at a chiropractor’s office.

Money is tight and dwindling. Relatives are raking together what money they can spare to help Juarez get by in Mexico.

Her husband Erick expects to be in a hospital getting a stem cell transplant in a few weeks. He has family nearby and tears up when asked how he will raise their son or make a life after his wife is deported.

Mexico is no place for a child if there’s no money or income, Juarez said. So David will stay behind in Detroit.

Maria Juarez doesn’t know if her son will remember her. He can’t talk yet. Doctors will test him when he’s two-years-old for cognitive and speech delays.

She likely will miss all of that.