June 2022 marks the 40th anniversary of Vincent Chin’s murder, an Asian American who was brutally killed with a baseball bat after his bachelor party in Highland Park by two white men who blamed the Japanese for a downturn in Detroit’s automotive industry. The hate crime spurred a multi-cultural civil rights movement united around equal justice and human dignity, and Detroit was the epicenter.

RELATED: Four-Day Event Set to Commemorate the 40th Anniversary of the Murder of Vincent Chin

Detroit Mayor Mike Duggan, activist, journalist and American Citizen for Justice Co-Founder Helen Zia, APIAVote Michigan Executive Director Rebeka Islam and State Senator Stephanie Chang recount the tragic history of Vincent Chin’s murder, what to expect from the remembrance and rededication events and the importance of commemorating the murder as the AAPI community continues to fight for equality in the United States. 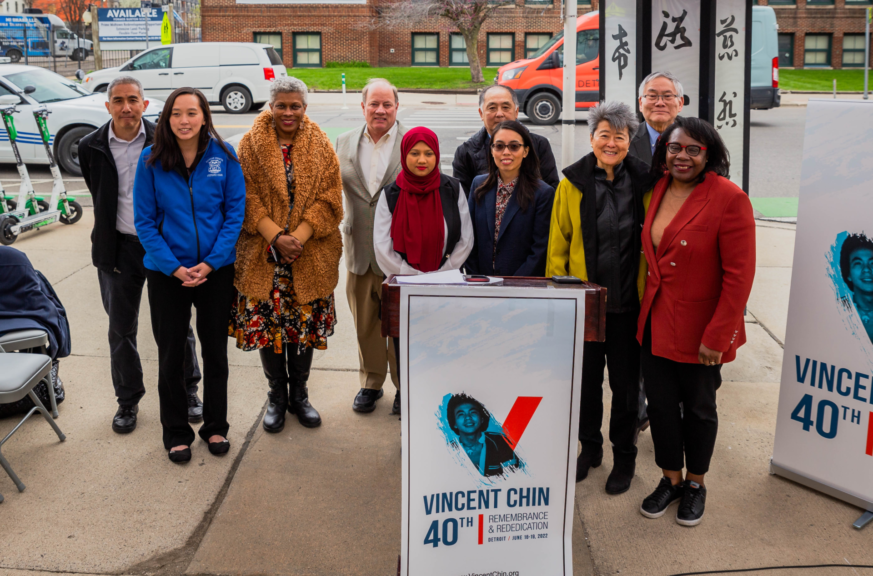 Bill Kubota, Senior Producer, One Detroit: Detroit: Cass (Ave.) just south of Mack and MLK, where Chinatown used to be.

Bill Kubota: This is the official announcement of the vincent chin 40th remembrance and rededication. Activists that helped bring the case to light have gathered again. Four days of events are scheduled in June that will look at that history.

Rebeka Islam, APIA Vote Michigan: With nationwide attention on Asian American hate incidents we are reminded again of Vincent Chin’s brutal 1982 murder and miscarriage of justice that followed. We cannot talk about hate crimes and senseless killings today without talking about Vincent Chin.

Helen Zia: In 1982 the horrific baseball bat killing of Vincent Chin on the eve of his bachelor party and the miscarriage of justice that followed and allowed his two white killers to be freed without spending a single night in jail because the judge then said ‘These are not the kind of men you send to jail in a city like Detroit,’ that was the springboard for the modern Asian American civil rights movement.

Bill Kubota: Vincent chin’s mother, Lily Chin fought for justice with the help of activists Helen Zia, Jim Shimoura and Roland Hwang. Back in the ‘80s Detroit was mired in a recession in part because car production was down as Japanese imports had taken hold.

Bill Kubota: Some Detroiters expressed their anger at import cars. With Vincent Chin, well, that anger, and violence included a person too.

Helen Zia: It truly helped build an American civil rights movement that was multi-racial, multi-cultural, united for equal justice and human dignity and Detroit was its epicenter.

Bill Kubota: Part of this history has been kept alive thanks to WTVS, Detroit Public Television, which worked with filmmakers Christine Choy and Renee Tajima Pena to make the 1987 documentary ‘Who Killed Vincent Chin?’ featured in upcoming events and airing again nationally on PBS.

Detroit Mayor Mike Duggan: And the first I heard about it I said this can’t be true. And I got deeply interested and I said how can this happen in my hometown.

Mike Duggan: The first thing I said to them is, ‘Explain to me how the Vincent Chin case could have happened?’ And I heard the kind of defensive language, you heard, ‘You’ve got to understand we’ve got three hundred prosecutors, we’ve got 40,000 felonies a year, there are pleas you can’t keep track of everything. And I said ‘Let me ask you all this: If it had been a 27-year-old white suburbanite who had been beaten to death with a bat by two Asian men, do any of you here think you would not have bothered to go to the hearing and he would have gotten probation?’ And it was met with dead silence. And I said I want to have a different standard in this office.

I want to make sure we are charging people, we don’t charge people more or less because of the color of their skin, and we don’t charge somebody more or less because of the color of the skin of the victim and we’re going to put processes in place where we’re going to measure our charging patterns, our plea patterns, our sentencing patterns because it’s the responsibility of the leadership of the office to make sure that the implicit bias each of us has as an individual doesn’t get translated into the criminal justice system.

Michigan State Senator Stephanie Chang: We are also in this time right now where there are so many forces at play right now that are trying to whitewash the way that we teach our history and I think the fact that we’ve got this 40th Anniversary this year the killing of Vincent Chin is yet another reminder of how important it is that we are teaching every child the history and the true history and the whole history about what happens in our country ‘cause that is the only way that we are going to get better and we are going to be able to achieve the type of America that my parents came here believing in. 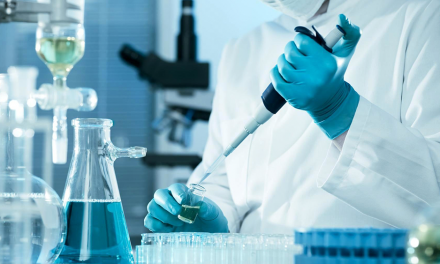 How bad is Michigan’s PFAS problem? 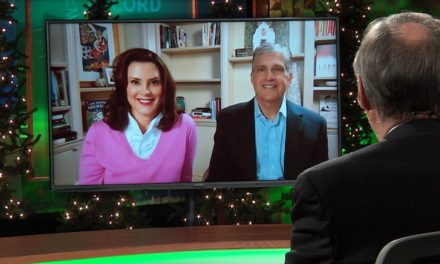